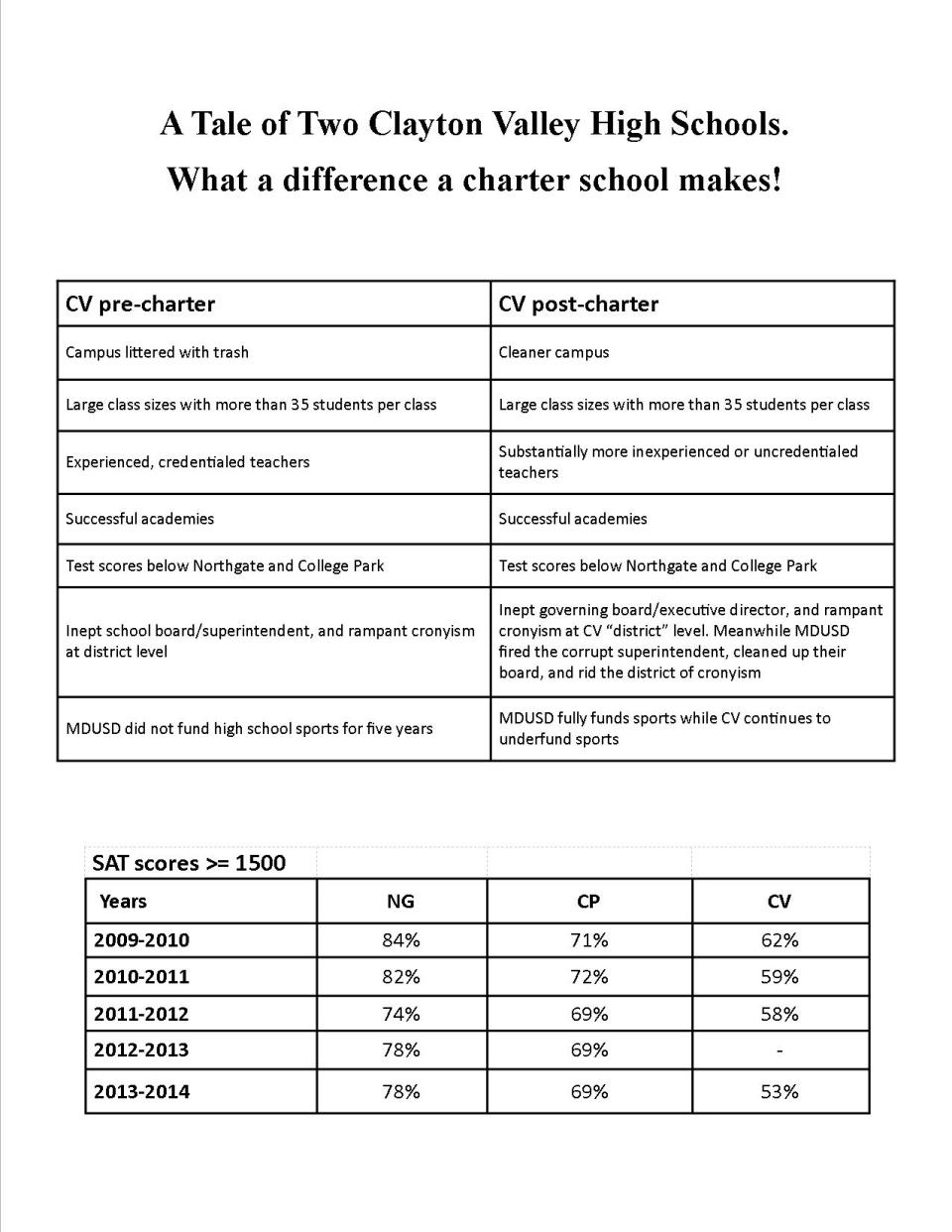 According to a declaration made by Neil McChesney in a letter addressed to CVCHS, “I left (CVCHS) on or about March 2, 2015 to pursue other interests, notably creation of a performing arts charter school”.  Mr. McChesney continued to receive monthly payments, totaling $9,600.00 from Clayton Valley Charter High School between April 1, 2015 and August 1, 2015 for “consulting work.”

What exactly is Mr. McChesney doing for Clayton Valley Charter High School, besides receiving money that could be spent on the students’ education?  Stakeholders for Transparency has requested a contract describing his duties, but have been told that the school needs extra time to “search for and collect” the requested information.

We are especially concerned because McChesney has been working to open the School of Performing Arts (SPA), and in the Contra Cost County Board of Education’s final report, “CVCHS provided the requested written confirmation that no funds were provided to the SPA Charter” and “provided the requested copy of its annual budget, showing no funds have or will be transferred from CVCHS to the SPA Charter.”  (Final CCCBOE Report, page 4 –   presented at the Jan. 13, 2016 Board Meeting). 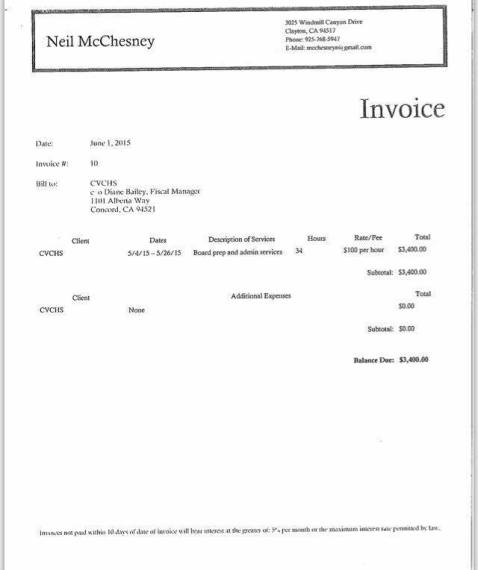 1. I left CV mid-year because I was miserable working there.

Yes, it’s true…eventually, I would have moved to Santa Rosa because my
boyfriend took a job there. When we first found out he got the job, I decided it would
be best if I stayed to finish out the school year. I even made plans to stay with a
coworker until June and paid the first months rent! However, I realized how utterly
unhappy I was all the time. I would come home from work stressed out and anxious,
I had a hard time sleeping, and for the first time in my life, I started seeing a
therapist.

A couple of months ago, the admin team decided to fire our copy-volunteer.
She was an integral part of our day as teachers and I was upset about it. I sent Neil
McChesney an email asking if they could replace her with someone else. This email
went back and forth and every single time he replied, he changed the reason why
they let her go and why we weren’t allowed to have someone make copies for us. The
staff knew that I was speaking to admin about this issue and I was contacted by many
teachers who were concerned that this was just one more way the admin team was
asserting their power. Neil finally told me that the secretary’s in the front office
would make copies if we needed them to. After getting that information, I sent a
private email on my personal gmail account to all staff on their private email
accounts. (This is common for union business and other related issues). In that
email, I said that Neil offered the front office as a back up for copies and I suggested
that the teachers take him up on his offer. Given that it was only November, and we
as a staff had made over 100,000 copies to date.

Someone on the all-staff email forwarded this private message to Neil and he
chose to write me up. He skipped over the discipline steps outlined in the staff
handbook and went straight to step 3-a letter of reprimand. He justified this action
by stating that what I did was “Comparable to bomb threat.” This is an actual quote
from the meeting we had when with my CTA representative present. My CTA rep
found this to be completely outside of the bounds of the school to discipline me for a
private email and we are now going to PERB after having filed an unfair labor
practice against the admin team. The letter of reprimand was a gag order. It said
that if I talked to anyone about anything that could be perceived as negative towards
clayton valley, I would be suspended w/o pay.

In an effort to try to get me to back down from the unfair, Dave Linzey came
and talked to me, against my CTA rep’s wishes. She had explicitly told him not to
speak with me but he chose to ignore her and corner me in my classroom. I asked
him why the admin team didn’t follow discipline protocol and he said, “Well Tori, if
you’ve got a child molester on your staff, you don’t follow the traditional steps of
protocol, you go straight to the last step.” He literally compared my private email
telling the staff that they could now send their copies to the front office to a child
molester.

After that, I was done. I went home that day and updated my resume on edjoin,
found a job at a wonderful school in the Santa Rosa area and moved.

Dave Linzey is a great leader when things are great and other people are making
him look good. He is a terrible leader when things start going wrong. He throws
tantrums, and threatens people. He turned into a dictator as soon as he realized that
people weren’t interested in listening to his lies anymore. The only reason he hasn’t
been fired is because the board of directors has absolutely no idea what they are
doing so they depend on him for guidance and he gets to do whatever he wants
without them questioning him because they think that ’He’s the expert.”

There’s a reason why the man has had a new job every two years for the last decade.
He comes in and charms everyone, then he pumps them up and everyone wants to
do well. Once they do well, he takes the credit. Now that the charter is imploding, I
think we’re seeing the real Dave Linzey:

I hope this investigation is true to justice and gives CV the closure it needs so that it
can move on and be great again, The students and the staff deserve to be given that
chance,

If I find myself back in the Concord area in the future, I will look forward to putting
in my application at CV as long as Dave Linzey and Nell McChesney are gone, They’re
both unprofessional and have no true leadership skills, CV cannot be great again until people who know what they’re doing are in their place,

Thank you for your time, 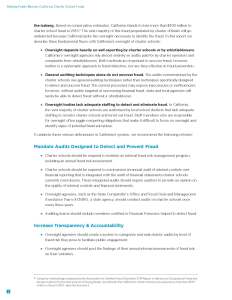 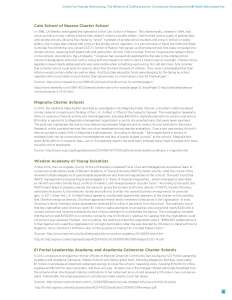 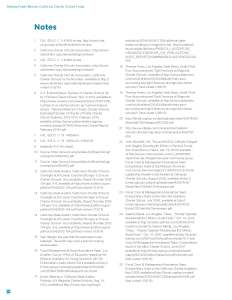 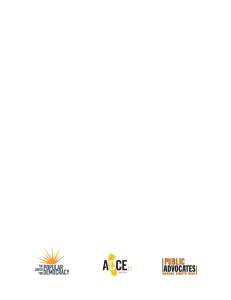 The Administration at Clayton Valley Charter High School was recently notified that the California Teachers Association will be filing unfair labor practice charges against the Charter.  Here is a copy of the letter that was submitted to the administration. END_OF_DOCUMENT_TOKEN_TO_BE_REPLACED

This letter was submitted to us by a current CVCHS staff member:

A few weeks ago an efficient and popular parent volunteer was fired from doing her volunteer work in the copy room! This volunteer went beyond the call of duty in her ability to take on a task of any size, organize, staple, collate AND greet all teachers who crossed her path with unfailing support and patience. She saved teachers many hours with her work and will be greatly missed. END_OF_DOCUMENT_TOKEN_TO_BE_REPLACED

Stakeholders for Transparency is a grass roots group that was formed to advocate for the transparent operation of Clayton Valley Charter High School. We are Parents, Teachers, Staff, Community Members, Students, and Alumni. We are stakeholders united in the effort to provide the highest level of education to the children of our community. We battled long and hard to convert Clayton Valley High School to a Charter School. We won that battle on January 11, 2012 and immediately proceeded full speed ahead to move our school from “Good to Great” and we never looked back… until now. We had a common vision to make Clayton Valley a school that we could all once again be proud of and could bring its students to the highest level of academics and character development. But now others have used our passion to further their own ambitions. They have an AGENDA, which does not seem to put CVCHS as their highest priority. What is their agenda—could it be for personal gain or personal recognition? They seem to be obsessed with the need to grow, no matter what the risk, no matter what core values are lost or what ethics may be ignored. END_OF_DOCUMENT_TOKEN_TO_BE_REPLACED

This is an excerpt from an article published by By Lou Fancher of the Contra Costa Times.  Here is a link to the full article.

In his article Mrs. Fancher reported on the continued conflict between the executive director, David Linzey, and the CVCHS faculty.

“Lineweaver said the interview on June 17 included discussion of complaints she had made about Linzey’s failure to respond to what she said were false, unsubstantiated complaints filed by a teacher against her. Lineweaver said the discussion was on her complaints about Linzey, but not about the complaints Linzey and the teacher made against her. A request to the school asking for clarification about the board’s decision to make portions — but not all — of the investigative report public, received the following response from Neil McChesney, director of Administrative Services.

‘Due to the nature of such matters, at this time we offer no public comment.'”